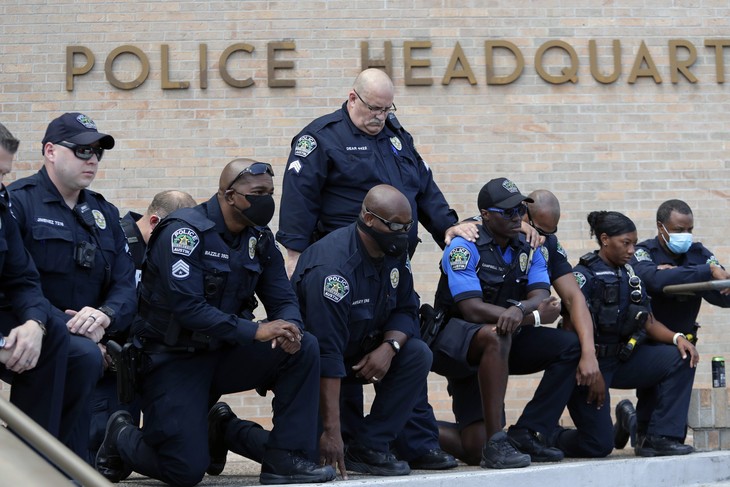 Top national Democrats are working feverishly to tamp down calls from party members to defund the police, not because they disagree with the concept, but because it’s a loser politically and they know it.

Senior Democrats are hoping to slow down the momentum for the idea before it overshadows their broader police reform effort — and fuels national Republicans’ argument that Democrats are moving to the fringe left as the November election approaches, according to new reports.

“I think it can be used as a distraction and that’s my concern,” Rep. Karen Bass (D-Calif.), chairwoman of the Congressional Black Caucus, said Monday, according to Politico. “I think the intent behind it is something that I support — the idea that communities need investments.”

First, they want to reform the police. Then defund them. Simple.

Questions of funding or structure would not be part of the reforms, and left to local leaders.

“We’re keeping our eyes on the prize, and that needs to be the story. State and local will do what state and local needs to do,” Rep. Lisa Blunt Rochester (D-Del.), also a CBC member, said Monday, according to the report. “We are the Congress. What we’re doing here today is our role.”

Their problem, as this Washington Free Beacon analysis suggests, is that they have left Trump and the Republicans a huge opening to exploit in November.

While the proposal is popular among the party’s progressive activist wing and on Twitter, it faces a hard wall of resistance among the wider public. A recent YouGov poll showed that fewer than 20 percent of Americans of all parties supported any cutting of police funding—a finding consistent with decades of polling.

Police defunding or abolition has long been a key idea of the radical left, with advocates arguing that the use of state force should be replaced with more equitable redistribution and investment, to target “root causes” of crime rather than responding to it after the fact. That view appears to have risen to the upper echelons of the Democratic power structure—without, however, growing notably more popular among voters.

No doubt Trump strategists are working hard to come up with the best way to use this gift Democrats have bestowed on them. Biden may not support defunding the police and most prominent Democrats won’t either. But the radical fringe which grows in power within the party by the day may want to force the issue into the platform by convention time. Biden would be stuck running a campaign what “defund the police” hanging over his head the whole way.

Party leaders may be crossing their fingers and hoping the defunding issue disappears before too long. That’s what happened to the “Disband ICE” issue that gained popularity a year ago. But the difference is that activists today have the party’s white leadership by the gonads and will squeeze as long as they are being appeased.

This YouGov poll shows what they’re terrified of.

Police abolition’s unpopularity is bipartisan: The YouGov poll found that just 16 percent of Americans favor cutting police funds, including 16 percent of Democrats, 14 percent of Clinton voters, and only 33 percent of black people. Data from the General Social Survey stretching back to 1984 find that fewer than 20 percent of white, black, and Hispanic respondents believe that police should be given less money, never mind defunded altogether.

Biden and national Democrats will swear on a stack of bibles they are against defunding the police. But doesn’t that make them in favor of police brutality? For Democrats, it’s what ye sow, so shall ye reap at the ballot box.