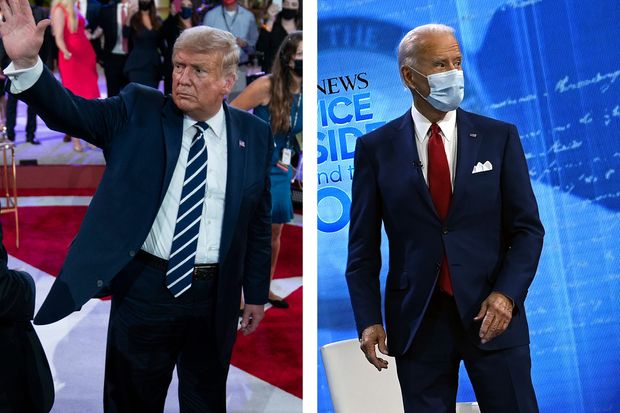 Donald Trump and Joe Biden were in different cities for the dueling town halls Thursday that replaced their debate. But they may as well have been in different universes.

Replacing the presidential debate with competing conversations with voters was a fitting symbol of a politically divided and socially distanced America. Instead of speaking to, or even shouting at, each other, Trump and Biden spoke past one another on different networks, allowing Americans to choose a favored candidate to describe reality as they want to see it.

The town halls hosted by NBC in Miami for Trump and ABC in Philadelphia for Biden are unlikely to attract nearly the audience a debate would, history suggests, and even many Republicans were baffled by Trump’s decision to withdraw from the second presidential debate when he’s down in the polls and needs every opportunity possible to try disrupt the race’s status quo.

Going into the town hall, Biden led Trump by 9.2 points in the NBC News national polling average. Most swing-state polls in recent months show the Democrat to be the favorite.

It was not clear the town halls would change the trajectory.

Here are five takeaways from the two events:

At the first debate, Trump claimed he didn’t know much about the Proud Boys, a violent far-right extremist group, but told them to “stand back and stand by” in a move they heard as an endorsement.

In his NBC town hall, Trump claimed he didn’t know much about QAnon, the groundless conspiracy theory that claims elites run a vast baby-eating satanic cult, but Trump said something they are sure to hear as an endorsement.

“I know nothing about QAnon,” he said. “I do know that they are very much against pedophilia and I agree with that.”

An FBI field office recently warned that “fringe political conspiracy theories” like QAnon “very likely motivate some domestic extremists” (it already has motivated some acts of violence) and social media giants have clamped down on QAnon.

Trump also bristled when Guthrie asked him to clearly and forcefully condemn white supremacists, but the only reason he keeps getting the question is because he seems so uncomfortable answering what would be a layup for any other politician — including his own vice president.

“I denounced white supremacy," he said. "What’s your next question?”

Biden gave his most pointed denunciation yet of the 1994 crime bill that he helped write, which has been linked to the rise of mass incarceration with disproportionate impacts on Black Americans.

Asked if it was a mistake to support it, Biden said: “Yes, it was.”

He elaborated by saying things have “changed drastically” since 1994 and noted that many Black leaders at the time supported it. He pinned a heavy part of the blame on “what the states did locally” and said the goal of the bill was “same time for the same crime.” Still, Biden conceded, “It was a mistake.”

Moments earlier, Biden was asked by a young Black man why his demographic should feel motivated enough to vote for him — a question that cut to the heart of one of the former vice president’s weaknesses: A lack of enthusiasm among young voters, including non-white millennial and Gen Z voters, who lean left but tend to be unreliable at the ballot box.

Biden gave his most extensive answer yet on the possibility of expanding the Supreme Court as Republicans move to confirm Trump nominee Amy Coney Barrett.

“It depends on how this turns out,” he said, referring to the confirmation process in the GOP-led Senate and whether it is rushed through before Election Day.

He said he’s still “not a fan” of “court-packing” because it could lead to a tit-for-tat escalation. He expressed more openness to changing rules surrounding lifetime tenure of justices in a way that complies with the Constitution. But he didn’t commit to any course of action, saying that much of it depends on how Republicans approach the Barrett nomination.

“I'm open to considering what happens from that point on,” he said.

Biden criticized Barrett as a nominee who “didn’t answer very many questions at all” and said that LGBTQ Americans have “great reason to be concerned” that she could vote to take away their rights. He added that people should also be concerned about their access to health care with a Republican-led lawsuit to invalidate the Affordable Care Act headed to the Supreme Court.

The president has one job if he is to turn around his weak standing in the polls: Bring down Biden, just as he brought down Hillary Clinton in the closing days of their 2016 battle.

But over the course of the hour on national television, Trump barely mentioned his rival, let alone in the kind of sustained way necessary to do damage to the frontrunner. When he did mention Biden’s name, it was mostly to attack the news media for not asking the Democrat the questions Trump wanted them to.

Trump’s entire campaign strategy, like that of the other incumbent presidents before him, is built around making the election a choice between him and Biden, instead of a referendum on his presidency, and Trump has been more on-message at his rallies and with friendlier interviewers.

But under Guthrie’s tough, rapid-fire questions, Trump missed opportunities to pivot to Biden and largely gave the former vice president a pass.

It was apt that two polar-opposite candidates offered polar-opposite tones as they faced questions from the moderators and voters. Biden spoke in calm and conciliatory tones, calling for listening to scientists on a national coronavirus policy and promising to work with Republicans to achieve bipartisan goals.

“What I will be doing, if I’m elected president — not a joke,” he said. “I’m going to pick up the phone and call them and say, let’s get together.”

He predicted that with Trump and his “vindictiveness” gone, “there’s going to be, I promise you, between four and eight Republican senators who are going to be willing to move on things where there’s bipartisan consensus.” It was a version of a line he used on the campaign trail, often to criticism from progressives who argued he was being naïve about the GOP.

Trump, meanwhile, was often hostile to Guthrie’s questioning. He complained constantly about the media, the IRS, and others treating him unfairly.

He sowed doubt about the science around the Covid-19 pandemic, suggesting masks will not protect people despite what nearly all of his advisers say. And he said getting sick from the virus himself had not changed his views on masks, even as his ally Chris Christie, the former governor of New Jersey who helped Trump prepare for the first debate, said Thursday that he was wrong for not wearing a mask after being put into intensive care with the disease himself.