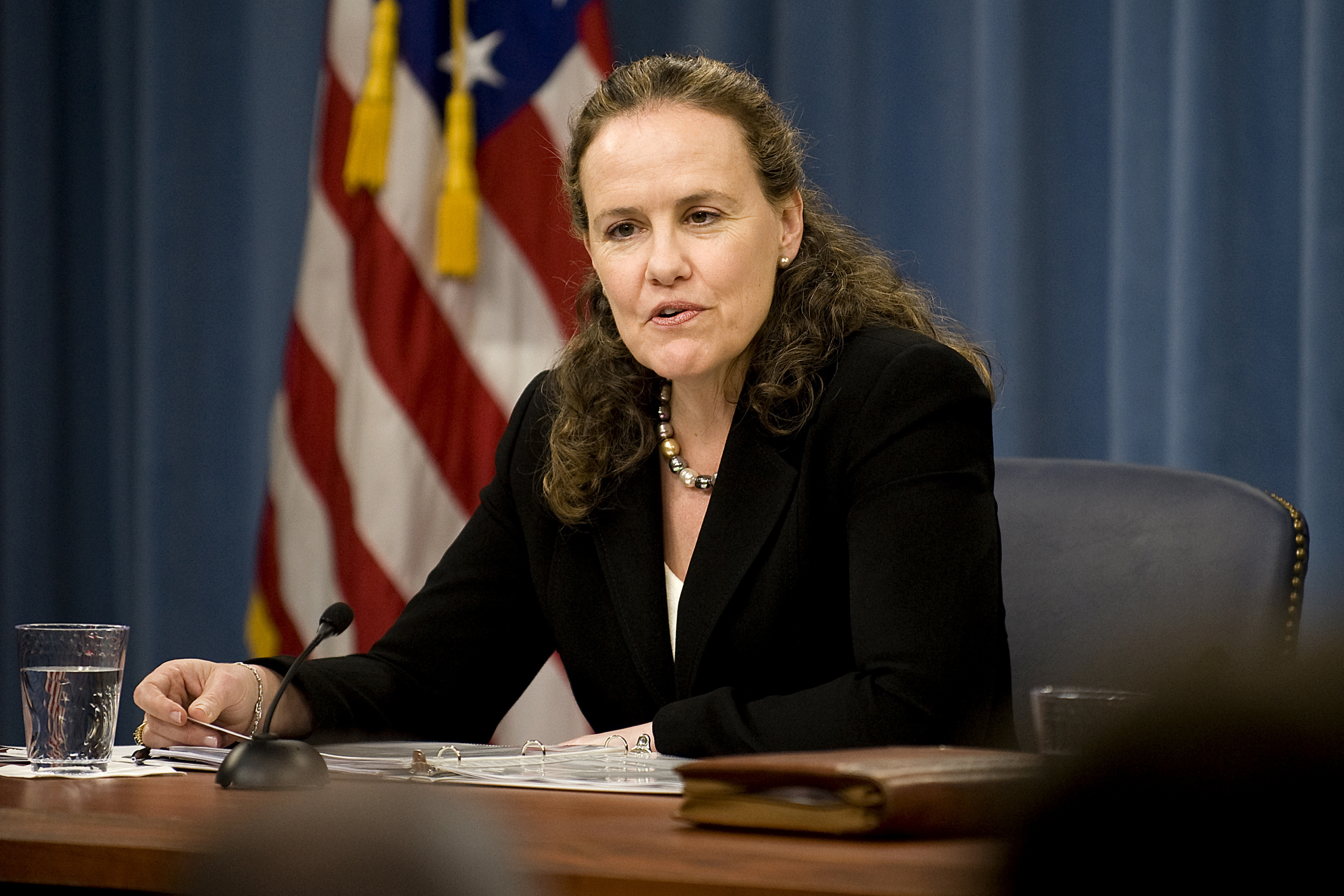 One of President-elect Joe Biden’s leading contenders to be Defense secretary wouldn’t challenge Washington's defense orthodoxy, but she would break barriers in another way.

She would be the first woman in the job.

Michele Flournoy, who held the No. 3 civilian Pentagon job during the Obama administration, is widely seen as the odds-on favorite to be Biden’s Pentagon chief.

A respected policy wonk, Flournoy has recently stressed the need for greater investment in emerging technologies to better compete against China.

If chosen, her supporters say, the 59-year-old would bring an experienced and steady hand to leading the largest federal agency as it recovers from the turmoil of the Trump administration.

“She knows the Pentagon incredibly well. It's a vast, vast bureaucracy that nobody can fully understand because just it‘s so, so big,” said Rosa Brooks, who worked under Flournoy from 2009 to 2011. “But if there's anybody who understands it as well as anybody could understand it, it’s Michele.”

Her greatest opposition could come from within the Democratic Party, as progressives look warily at her work as a consultant and see her as emblematic of what they consider failed military adventurism of the past.

Some other names have been floated since Biden won the presidency — Sen. Tammy Duckworth (D-Ill.) and former Homeland Security Secretary Jeh Johnson, among them.

But Flournoy has been seen as the likely next Defense secretary in a Democratic administration since Hillary Clinton ran for president in 2016.

A spokesperson for Biden’s transition team told The Hill it “has not made any personnel decisions at this time.”

In a 2016 appearance at the Center for a New American Security (CNAS), a think tank founded by Flournoy, Biden referred to her as “madam secretary” to applause from the audience.

“I’m writing a recommendation for her, you know,” Biden added.

Mark Cancian, a former defense official now at the Center for Strategic and International Studies, said Flournoy “would fit a Biden effort to scale down the partisan rhetoric.”

“She’s firm about her ideas but she’s polite,” he said.

And Mackenzie Eaglen, a former congressional adviser on defense now with the American Enterprise Institute, described Flournoy as a “known entity” in Washington defense circles.

“We’re all familiar with her,” said Eaglen, who has worked with Flournoy numerous times in the past decade. “Everybody has worked with her, and she’s very measured, thoughtful and focused on not just the job at hand but the next generation of defense leadership which has really endeared her to a lot of people around town.”

In 2007, she founded CNAS, raising her profile in the defense community. In 2009, she was chosen to be former President Obama’s under secretary of Defense for policy, which at the time was the third-highest civilian position at the department.

As under secretary, Flournoy helped shape the administration’s counterinsurgency strategy in Afghanistan.

Michael O’Hanlon, a senior fellow at the Brookings Institution who has known Flournoy for more than 25 years, also described her as “instrumental” in pushing then-Defense Secretary Robert Gates to support the raid on Osama bin Laden’s Abbottabad compound at a time when he was more inclined to support an airstrike.

“I once thought Michele a very solid yet somewhat cautious thinker. If she had a flaw, I thought, it was perhaps being slightly too cautious. I have changed my mind on that latter point,” O’Hanlon said in an email. Her position on the bin Laden raid “showed a gutsy willingness to take a very calculated and carefully assessed risk.”

abad compound at a time when he was more inclined to support an airstrike.

“I once thought Michele a very solid yet somewhat cautious thinker. If she had a flaw, I thought, it was perhaps being slightly too cautious. I have changed my mind on that latter point,” O’Hanlon said in an email. Her position on the bin Laden raid “showed a gutsy willingness to take a very calculated and carefully assessed risk.”

One of Flournoy’s unique skills, Brooks argued, is her ability to communicate across the civilian and military worlds.

“One of the things that she would always say to those of us on her staff and [the Office of the Undersecretary of Defense for] Policy was, our job is to be translators, to take these two cultures the military and civilian culture, each of which have their own vocabulary, their own habits sometimes,” Brooks said.

Brooks highlighted a time she said Flournoy acted as a mediator between the White House and the Pentagon amid a fight over preparing for the worst-case scenario if there was fallout from the 2011 South Sudan independence referendum. The White House was not giving the military the specificity it requires for planning, Brooks said.

When the fight reached Flournoy’s level, she brokered a compromise of “let's draw up some kind of back of the envelope stuff, and that'll at least give people a clearer sense of what we might need to do if things went bad,” Brooks said.

Brooks also recalled Flournoy pushing to make her department a more family friendly workplace, such as by instituting job sharing, and responding to critics worried that would affect the ability to react to crises by piloting the changes at one of her busiest bureaus, the Afghanistan-Pakistan bureau.

“Michelle is the kind of female leader whose immediate instinct is to look around and look for the smart women and the smart African Americans and smart people who have not previously been included and say, ‘Hey, we need you,’ ” Brooks said.

Flournoy left the Obama administration in 2012, returning to CNAS as its CEO in 2014. In 2017, she co-founded the WestExec Advisors strategic risk consulting firm with fellow Obama administration alum Antony Blinken. The Washington-based firm employs several other Obama-era national security officials.

This year, with her every move closely scrutinized amid speculation about her role in a Biden administration, Flournoy spoke frequently about what she sees as an eroding military advantage against China.

“The U.S. military is at a high-stakes inflection point: it must take a series of much bigger and bolder steps to keep its military-technological edge over great power competitors such as China, or it could lose that edge within the decade,” she co-wrote in a report for CNAS in July meant to provide recommendations for the next administration.

She similarly said at the Aspen Security Forum in August the military needs to make “big bets” on emerging technologies.

At Aspen, where she said she was open to being Biden’s Defense secretary, she also argued against “precipitously” withdrawing from Afghanistan.

“We would basically be pulling the carpet out from under our Afghan government partners, and Afghan women and Afghan civil society, that we fought so hard to help achieve a place at the table,” she said.

Such positions fall in line with establishment defense thinking, which could garner Republican support in a Senate expected to have a slim majority regardless of which party controls it. The Senate majority depends on the outcome of the two runoffs in Georgia in January.

The biggest resistance to Flournoy is expected to come from progressive Democrats. On Thursday, leading progressive Reps. Mark Pocan (D-Wis.) and Barbara Lee (D-Calif.) urged Biden not to nominate a Pentagon chief who has previously worked for a defense contractor.

A progressive advocate who asked not to be named to speak freely on the sensitive subject of nominees said progressives “aren’t exactly excited” about Flournoy, citing what he described as her silence on Saudi Arabia and the United Arab Emirates’ conduct in Yemen as other former Obama administration officials acknowledged their mistake in supporting the war.

But, the advocate said, progressives are weighing how hard to oppose her since she is seen as “inevitable.” One factor is what the rest of Biden’s national security and foreign policy team looks like.

“I personally will very much be watching to see if there is a balancing in some ways of Michele Flournoy’s positions and background and worldview with the secretary of State,” the advocate said.

Even with all the buzz behind her name, it’s “not a done deal” that Flournoy will get Biden’s Pentagon chief nomination, said one defense expert.

“A lot of people want that job,” the expert added. “Typically with a first term new administration, they are oftentimes looking for a national figure with political constituencies. Michele is more than likely to be a deputy secretary first if she doesn’t get the nomination.”

Who do you trust more?