Mary Elizabeth Taylor, one of the highest-ranking Black officials in the administration, said Trump’s actions “cut sharply against my core values.

Mary Elizabeth Taylor, one of the highest-ranking African American officials in the Trump administration, resigned on Thursday over President Donald Trump’s response to racial tensions across the nation, The Washington Post reported.

Taylor, 30, was the youngest person and first Black woman to serve as assistant secretary of state for legislative affairs in the State Department.

In her resignation letter to Secretary of State Mike Pompeo, obtained by the Post, Taylor said the president’s “comments and actions surrounding racial injustice and Black Americans” had “cut sharply against my core values and convictions.”

“Moments of upheaval can change you, shift the trajectory of your life, and mold your character,” wrote Taylor, who has served with the Trump administration since its first day in January 2017. “I must follow the dictates of my conscience and resign as Assistant Secretary of State for Legislative Affairs.”

Trump has come under scrutiny for his response to anti-racism protests across the country since the police killing last month of George Floyd, a Black Minneapolis man.

As protesters took to the streets in Minneapolis, Trump called demonstrators “thugs” and tweeted that “when the looting starts, the shooting starts.”

He was later skewered for ordering police to clear protesters with tear gas and rubber bullets so he could walk to the front of a Washington, D.C., church for a photo-op; and on Wednesday, he told The Wall Street Journal that he’d made Juneteenth, the day celebrating the end of slavery in America, “very famous” after his controversial decision to hold a campaign rally that day in Tulsa, Oklahoma ― where a racist massacre took place in 1921. Trump has since postponed the rally by one day.

The PC thought police have been gunning for Christopher Columbus for years.

In the wake of the great civil – and, at times, violent - unrest we’ve seen in our country lately, it’s unsurprising that Columbus would once again resume his role as a proxy for every leftist grievance. All around the country, statues of Columbus have been destroyed and defaced all in the name of “progress.” Our statue in Wilkes-Barre, Pennsylvania was among these incidents, left unceremoniously graffitied this week by vandals.

Beyond these protests, Columbus is a symbol of Italian pride and also the American spirit of exploration that has driven our country for almost 250 years.

And while this may come to a surprise to coastal elites, he means a great deal to the people where I live. From the Knights of Columbus to the many monuments we have here, he represents more than the caricature that the left presents today.

As an American of Italian descent whose middle name is Rocco, I grew up hearing about the anti-Italian discrimination and hate that was present when my grandfather came to Hazleton, Pennsylvania in 1913. He often told the story about how his first grade teacher couldn't pronounce our family name (Buchicchio), so she shortened it to what it is today: Bognet. In my house, like others I know, celebrating Columbus meant honoring the Italian heritage of my family.

Columbus is a cultural touchstone to the many Italian-Americans who live in the northeast corner of Pennsylvania. This is a place that twice voted for President Obama, but supported President Trump in a big way in 2016. It was the votes of the people here who precipitated the fall of the Democrats’ “blue wall” on Election Night.

There are many theories about why President Trump was able to pull off his historic win in places that had not elected a Republican president in decades, but this current debate calls to mind one important reason: culture. President Obama tellingly revealed how the left really thinks about voters here in 2012 when he flippantly said Pennsylvanians – the majority of whom supported him in two presidential elections! – were “bitter” and clung to their guns and religion.

What the left, and particularly the progressive elites who run the Democratic Party, heading into the 2020 elections fail to understand is that it is precisely their attacks on and slow degradation of these values and traditions over the years that has left the people craving radical change from Washington-as-usual. Years ago, when Democrats like Bill Clinton negotiated away our jobs to foreign countries and boarded up our factories, for example, what did many people have left except fortheir culture?

There are real ways to address systemic inequalities in our system through economic and educational opportunities, but Democrats are repeating their past mistakes in stoking the flames of these wars on our culture. Not one person has ever been lifted out of poverty or been given a real chance at success in life by tearing down a statue. Unlike previous years, however, these traditions aren’t simply being taken away by slick politicians and legislation, but rather by violence and lawlessness aided and abetted by the supposedly “enlightened” left and their media accomplices. How can Joe Biden claim to be “Scranton Joe” when he caters to the woke fringes of his party in tearing down Northeastern Pennsylvania’s culture? This wholesale stampede to appease the progressive statue mob will only further alienate the voters they pushed away four years ago.
TOWNHALL.COM
https://townhall.com/columnists/jimbognet/2020/06/18/in-going-to-war-with-our-past-democrats-put-their-future-in-doubt-n2570864 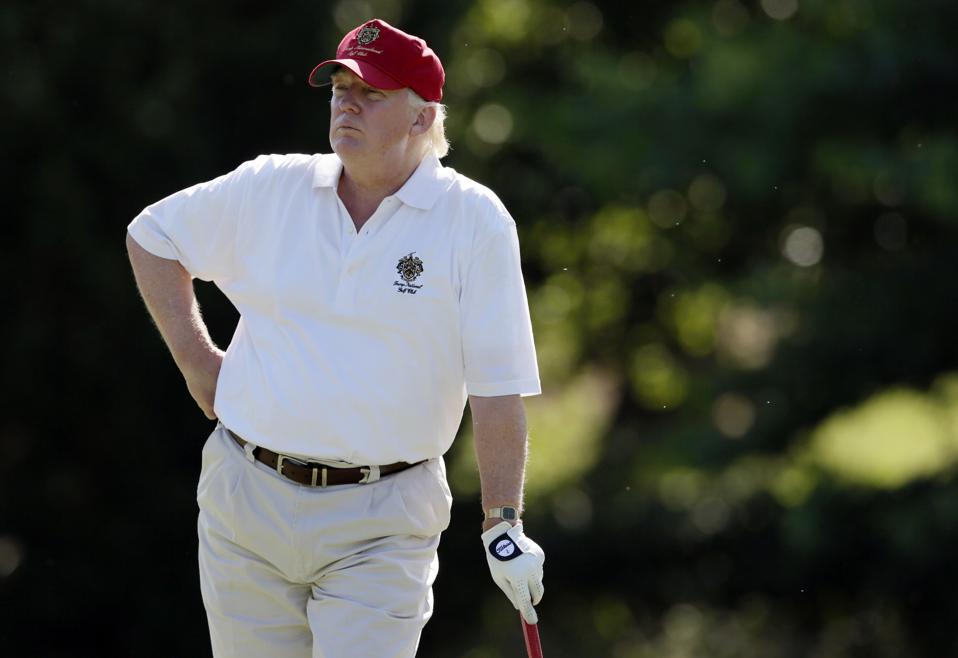 The golf course President Donald Trump owns near his Mar-a-Lago getaway and plays frequently when he visits is seeking a break on its rent because of lost business caused by the coronavirus outbreak.

Trump International Golf Club asked Palm Beach County to defer an unspecified amount of its $88,338 monthly rent, something the county has done for other tenants at properties it owns. Trump leased the land the 27-hole private club sits upon from the county two decades ago under a 99-year agreement.

Palm Beach County ordered the closure of golf courses in March as part of its pandemic response. They weren't allowed to reopen for more than a month and only then with restrictions.

“These mandated closures occurred during the busiest parts of our season,” club finance director Ed Raymundo wrote to the county in the one-paragraph letter on June 5. The request was first reported by the Palm Beach Post.

The county has not taken any action on the request.

Officials at the golf club and Trump International headquarters in New York did not return calls Wednesday seeking comment.

Trump usually spends about five hours at the course most days he is at Mar-a-Lago, which is about five miles (eight kilometers) from the course. Before the pandemic, the president usually spent one or two weekends a month at Mar-a-Lago between November and April along with the Thanksgiving and Christmas holiday weeks.